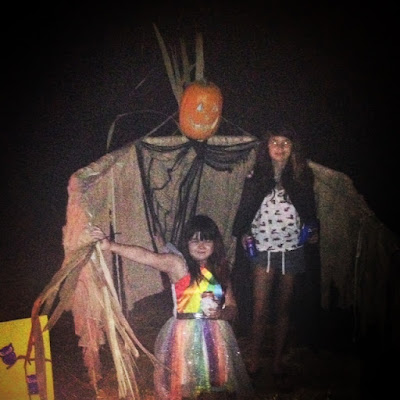 I am NOT that mom that gets excited about Halloween.You know, the one that starts thinking about next year's Halloween while still exhausted from the current one? The one that is willing to sew costumes no matter how crazy or difficult? Or the one that makes the traditional Halloween dinner of black worm spaghetti with blood sauce, mummy sausage, black cake, and has one of her best friends bring over a spooky salad year after year? The mom that uses her house as "home base", a meeting place for friends to start and end the Halloween night? The same place where kids will go through their loot, sort and engage in candy negotiation before heading home?

Yeah. That's not me, those are not my friends and that is not my house.

Last year at about this time I told my girls, "When and if we move to the Big Island, Halloween is going to be very different." After all, we lived in a neighborhood that was well-known for trick-or-treating. People from all over the island drove in just to spend a few hours walking around a single loop! We knew we had it good. Not just good but REALLY good.

Since that talk a year ago we did make that move. We live in the country now....and while we love living out in the"boonies" it is not a place to go trick-or-treating. What to do? Where to go? We had to figure things out before Halloween arrived.

For months prior I researched where was the best place to go. Even on Halloween morning I wasn't 100% positive how the night was going to play out. At the suggestion of many, we opted to go to the mall. At least we knew we weren't going to get rained on!

While the vibe was totally different from what we were used to, it went well. We timed it just right and was in and out of there in less than 20 minutes with their bags full of candy. The girls were happy but I definitely missed the lack of intimacy door-to-door trick or treating offered.

There was still light out and the kids wanted to do more. We headed to a haunted house ("Haunted Woods", to be exact). Unfortunately, I didn't pay attention to the hours of operation and we arrived too early. To kill some time we stopped in at a local school that was offering free activities and food for Halloween night. Momo had a good time playing a lot of the games and redeeming the tickets for a prize. Afterwards, we headed back to the Haunted Woods.

Was it scary? Yes. But not for reasons you may think. It was scary because it was dark, slippery and muddy. Definitely not the best situation to be in when you are recovering from a recent back injury! And of course I was wearing slippahs (flip flops).  I was so afraid I was going to fall and injure my back even worse that I was grabbing for anything that would help keep me steady. Trees, Kailani......whichever was closer! I'm pretty sure Kailani thought I was grabbing her because I was scared. HA! Let her believe that. But I won't lie, I may have let out a little scream a couple of times when a ghost/goblin/zombie caught me by surprise.

In the end the girls had fun. It was a different kind of fun but fun nonetheless. The one major thing that was lacking from our night was time spent with friends. I know our friends felt it too as we exchanged text messages, status updates, and pictures throughout the night of our separate, solo adventures.

How I missed the traditions that we had created over the years! How I missed our friends!

And I will admit, I even missed being "that" mom.

Hope you had a fun Halloween!