I recently went into a boutique and found a set of three baby burp cloths selling for $30.00. Really? You know darn well I pretty much dissected them: studied the fabric, design, workmanship, etc. only to come to the conclusion that (excuse my lack of humbleness) they are no better than mine or the other 28,000 (yes, you read that right!) burp clothes listed on Etsy! So the next time you're in need of a unique boutique type gift why not give handmade a try? You can find just about anything handmade on Etsy without the boutique price! You are bound to find something that you like!*
Speaking of burp cloths, a family friend recently had a baby. Instead of spending *cough-cough* $60.00 on two sets of three burp clothes I made a total of six with fabric that I already had on hand: 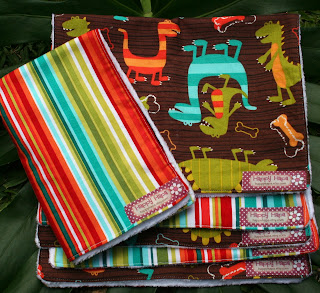 Laura W., recognize the fabric? :)
In addition to the burp cloths I've been busy sewing other things like camera straps, nursing covers, etc. And with my daughter's birthday coming up as well as Halloween I think my sewing machine is going to be running at full capacity! Thanks to all my fans, supporters and repeat customers for keeping me busy and for referring your friends! You guys are the best!
Another note: While I haven't been blogging as much you can always find me with status updates, one-liners and pictures on my Happy Hapa Facebook page. Come say "hi" to me there! Here's the link: Happy Hapa.
Have a great week! And east coast friends.....be safe with Hurricane Irene on the way!

*In no way do I mean to bash boutiques as many carry beautiful, handmade items! Just wanted to give a shout-out to all the wonderful Etsians out there! <3
Posted by ***Sharon*** at 6:14 PM 3 comments

Bake Sale time!
But what to make? We only had about two days notice so I had to think fast. Fast, easy and cheap came to mind but I knew my daughter would prefer something "fabulous". Thank goodness for Pinterest and an idea that my girlfriend Emily pinned! Mini Rice Krispie Ice Cream Cones! 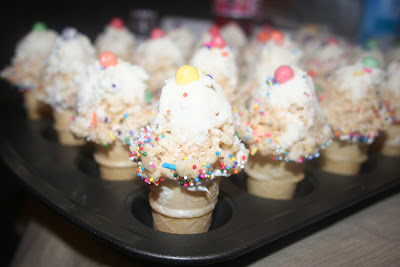 Aren't they CUTE? Not nearly as cute as the original recipe but that's okay! I packaged them in pairs in clear cellophane bags and they sold out FAST! I have to admit, it was hard to be humble when the other moms ranted and raved about them. My response, "Ohhh....thanks!" (insert sheepish grin) when I really wanted to respond, "I KNOW RIGHT?!? THEY ARE SOOOOO CUTE!" HA! 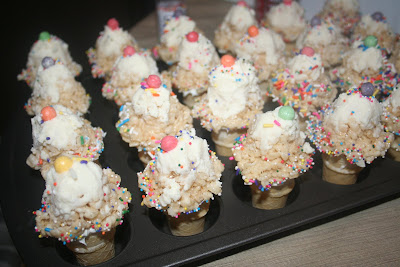 So you probably want the recipe? They are basically made up of a miniature cone (they are TINY! Not even 2 inches tall!), Rice Krispie treats, melted candy melts (or almond bark), sprinkles and a candy on top (I used little chewy Sweet Tarts for the "cherry"). Here's where I found the original recipe:
Cute as a Fox. Check her out and be inspired....they are AMAZING!

Of course since this was the first time I made them I did have some set-backs:
1) My candy melts did not want to melt! It's not like it was my first time doing it so I was a bit baffled. I even tried adding vegetable shortening like the instructions suggested but that didn't work either. Since I didn't have any more on me I had to work with what I had. I ended up molding the chocolate onto the Rice Krispie treats. Sure, it worked but it didn't give it the look of dripping, melting chocolate that I wanted.
2) Momo (4) REALLY wanted to help me. *Sigh* I put her on sprinkle duty and she sprinkled (POURED?) away. If it were up to her the little cones would be 90% sprinkles and 10% everything else.
3) Much like the instructions on the recipe warned me the little suckers are MASSIVELY top heavy. After putting the cones together the little things would topple over. I tried a few different things - adding frosting or candies to the cone but it just wasn't heavy enough. So, the next time I make them (and I will) I will stuff the cones with Rice Krispie treats as well. I just have to remember to make extra Rice Krispie treats. 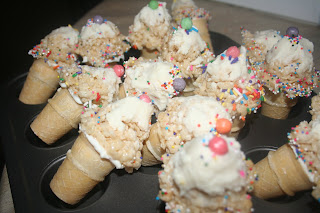 The recipe is definitely a keeper!

P.S. Want an invitation to Pinterest? Leave me your email address and I'll invite you!

T.G.I.F!
Seriously. I am finding myself desperately needing a break from our back-to-school routine and school has only been in session for two weeks! All the drama that comes with homework, bed time, wake-up time, after school activities, etc! Ugh! I know it will get easier (or I will become immune to it.....)
And let's not forget, FOOD! Breakfast, lunch, dinner....my child has an opinion on everything she eats and thinks she has the right to change her opinion at the blink of an eye. At least she's fair and complains about school lunch as well (minus the teriyaki meatballs which she LOVES! By the way, I have tried duplicating it and she has no problem telling me that it's not even close. Seriously? I have to compete with cafeteria food?!?)
To prevent my kid from "STARVING" herself at school (and then come home saying, "I am SO hungry!) I suggested she take home lunch on the days she didn't like what the school was serving. I had her look at the school menu and cross off the days she didn't want to eat school lunch: 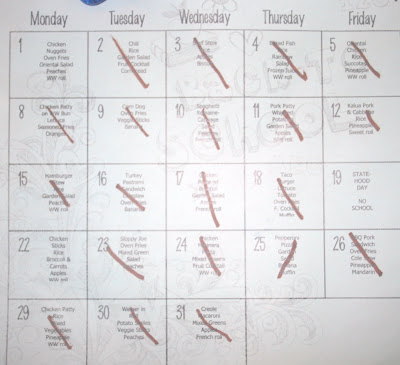 Really? Maybe that wasn't such a great idea after all? She only wants "chicken sticks!" And how can she not want kalua pork?!? Whose child is this?
*Sigh*
In all honesty it's been working out great! I guess it's time to stock up on sandwich bread, cheese, etc!
As my girlfriend Anita told me, "Happy Brown Bagging!"

Email ThisBlogThis!Share to TwitterShare to FacebookShare to Pinterest
Labels: back to school, lunch

But not bye-bye beach! We will always make time for you! 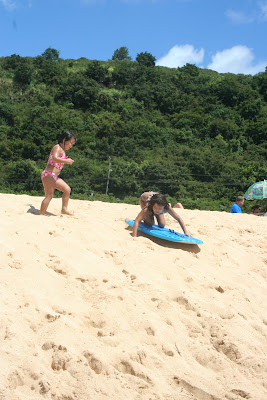 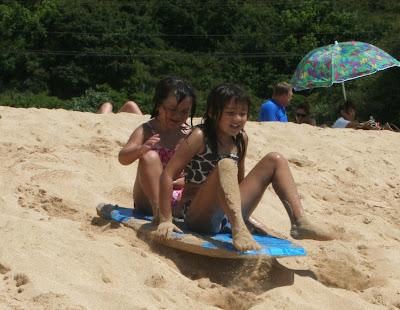 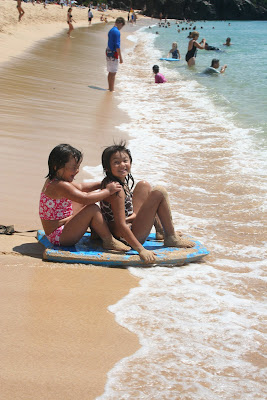 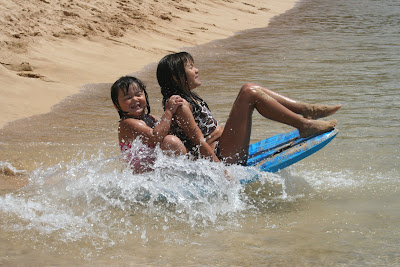 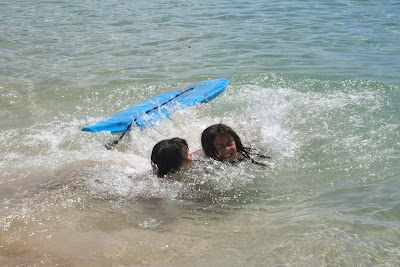 I can't believe today is the FIRST DAY OF SCHOOL! I know most schools in the U.S. aren't starting until the end of the month or even in September but the majority of public schools in Hawaii started today. What about you? When does school start where you live?
Much like last year I was definitely a little bummed that summer vacation was over. Trust me, Kailani felt the same way. As a matter of fact this morning she said, "Mom, if I could be any princess this morning it would be Sleeping Beauty...or Snow White.....or any princess that is sleeping." Funny girl(that doesn't even like princesses!)
However, there was ONE thing she was looking forward to - her "First Day of School" cake. It's something we've been doing since she started kindergarten! It's always a simple cake (because I can do no other - HA!) with the new grade decorated on top. This year's topping made me giggle a little. I have to give Momo credit!
So here she is on her first day of 4th grade, followed by pictures of her first day of 3rd, 2nd, 1st and kindergarten. It's amazing to see how much she has changed throughout the years! 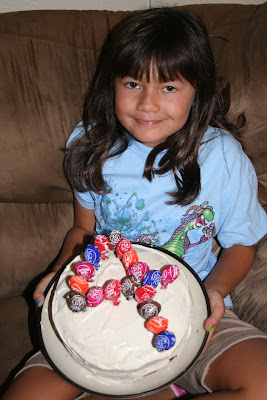 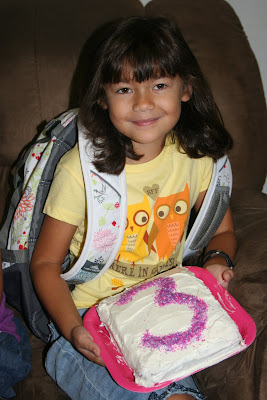 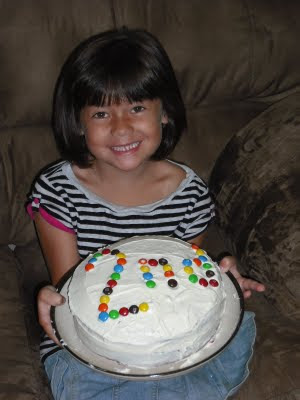 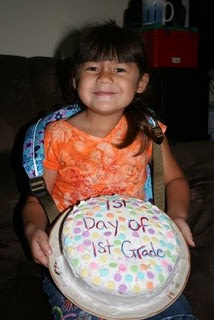 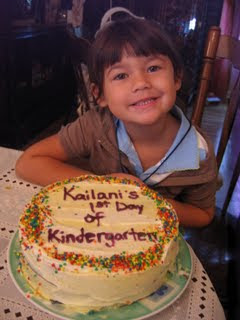 Hope everyone has a great new school year!

Sharing this post with Tip Junkie's "Tip Me Tuesday":