Why hello there!
Yes, in case you were wondering I am alive and well. Happy (THRILLED) to be back home but trying to get settled is taking longer than expected. I guess that's what happens when you fire your movers the night before you move and end up living out of suitcases! We still have not resolved THAT problem yet! But things could be worse and I hate to complain - especially since I am HOME! :)
I am finally ready to start blogging again. Kailani starts school tomorrow (can you believe it?) so hopefully that will free up some more time. I also look forward to catching up on all of my favorite blogs and checking out those of you that have recently signed on to follow me. Thanks for checking me out, especially during this time of inactivity!
Since I was not able to put my sewing machine, craft supplies or any of my kitchen wares into my suitcases I have nothing to post in the crafting or cooking department! *Sigh* So I thought I'd post something from the archives - Kailani's birthday party from last year. I hope you don't mind!
Each year for Kailani's birthday I let her choose her theme. One year it was Power Rangers, two years ago it was tigers, then last year it was puppies. Who doesn't love puppies? What a fun idea!
One of the first things we did was go to the fabric store and pick out some puppy fabric to make her a birthday dress. Quite honestly I wasn't too thrilled with the fabric she chose but in the end it turned out pretty darn cute! Here she is in her birthday dress on her special day: 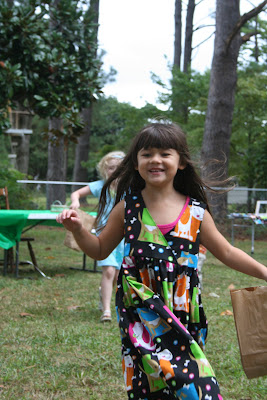 She had her heart set on a Build-a-Bear party but the nearest Build-a-Bear was not so near. So we can up with an alternative plan that ended up being just as fun. After an extensive online search I found a website where you can order animals to be stuffed. Ted E. Makers (Teddy Bear in a Box) has over 20 animals and even more clothing, accessories and sounds to choose from! One reason why I chose this company over some others is that their animals come with a zipper and lock to close them up versus having to sew them. Not only that the cost included the animal, stuffing, birth certificates and a little star to make a wish upon and put inside of the animal. Their customer service was awesome and the shipping was FREE (because I ordered "X" amount) and incredibly quick!
I had Kailani draw her own invitation and included a copy of the dogs available for adoption and asked each guest to choose in order their top three dogs (just in case the company was out of stock of a particular pet): 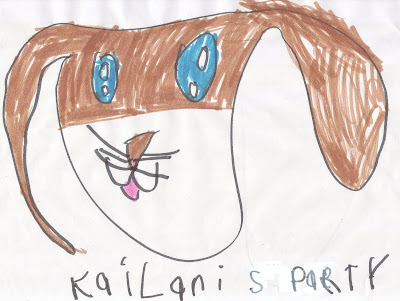 We made some dog houses out of appliance boxes - as you can see they are a little torn up from being played with! 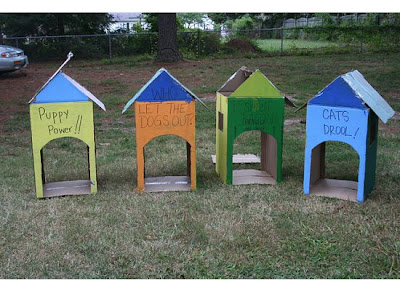 In addition to her cake (which she asked me to make - I dare not show you a picture!) we made individual cakes from mini angel food cakes. We frosted them in Kailani's favorite colors and filled them with Cocoa Puff cereal to look like dog food (huge hit!) 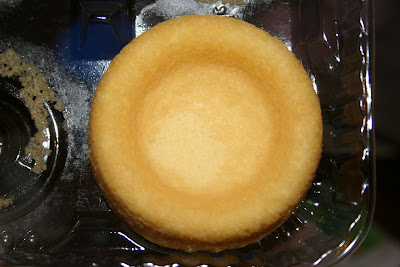 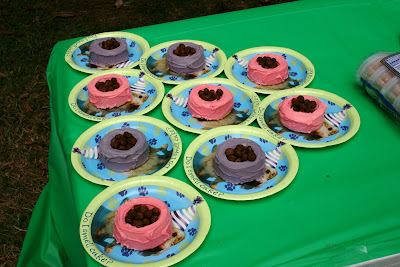 And while I don't have a picture (*hint-hint*) my girlfriend helped me out and made individual cookies in the shape of dog bones, frosted them in pink and purple and put several of them in small metal dog bowls (purchased from the $1.00 store at Target) and wrapped them in cellophane and tied them with a bow. These were used as goodie bags.

We decorated the front of the house with pictures of puppies on stakes. Each one had a different command - such as come, sit, stay, play: 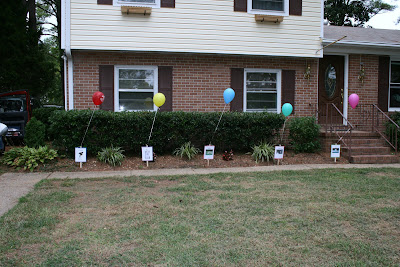 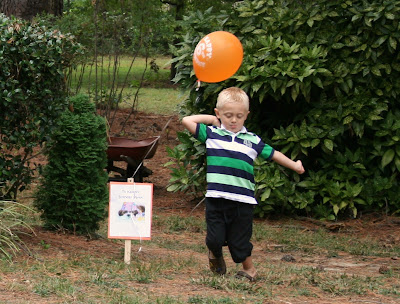 I also posted a welcome sign at the gate with instructions on what to do: 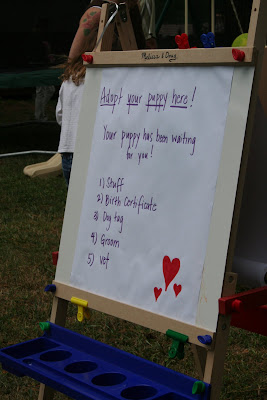 In case you can't see it the sign says,
Adopt your puppy here!
Your puppy has been waiting for you!
Stuff
Birth Certificate
Dog tag
Groom
Vet
I set up different stations for each of the steps. When it came time for the kids to stuff their puppies most had a tough time with it and needed parental assistance. I would recommend to anyone thinking of doing a similar party to have at least the arms, legs and head pre-stuffed and have the kids only have to stuff the tummies. 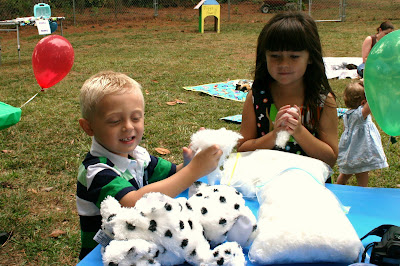 After stuffing their puppies the kids then named their puppy, filled out a birth certificate (with help) and made a dog tag out of Shrinky Dinks. You gotta love some of the names they chose! 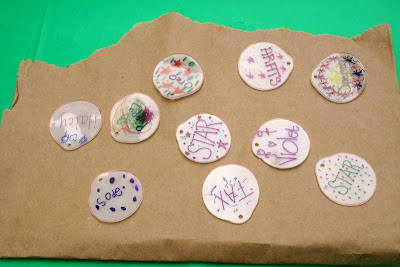 While waiting for their dog tags to shrink in the oven the kids then took their puppies to the vet station and grooming station. The vet station had a doctor's kit that I purchased from Walmart while the grooming station had a mirror, brush, blow dryer, stickers, ponytail holders and party hats. I don't know why I forgot to take a picture of the stations!
We then had all the kids gather around to introduce their newly adopted puppy to everyone: 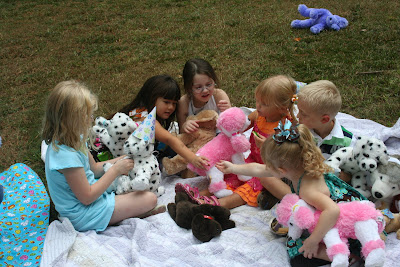 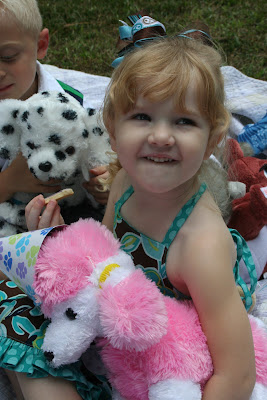 What the kids didn't notice was while they were busy yacking my husband, father and father-in-law were scattering dog biscuits throughout the yard! When they were done we gave each kid a "doggy bag" and had them search for the biscuits! 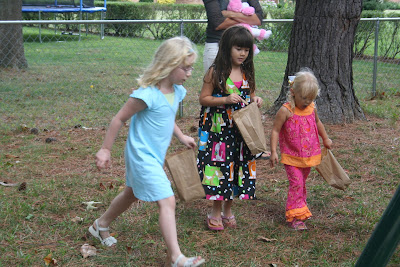 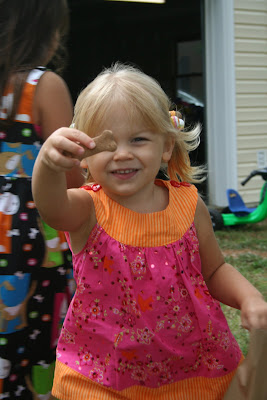 When it was time to open presents I took a picture of each guest with the birthday girl. I later included the picture with the thank you card that Kailani made: 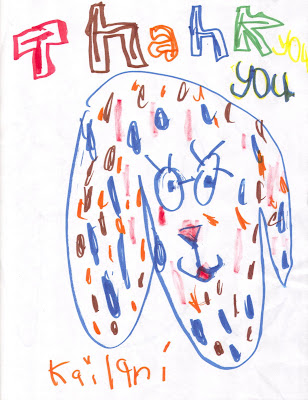 If all else fails throw the kids on the trampoline, seal it up and let them loose! 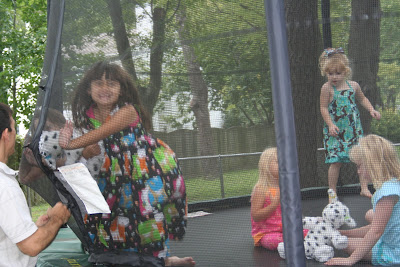 Kailani had a blast and I'm pretty sure her friends did too! If you have any questions about what I did please ask as I wasn't quite as thorough as I would have liked to have been in this post. It has literally taken me SEVEN days to publish this post as Momo has been quite demanding of my time!
Posted by ***Sharon*** at 1:33 PM