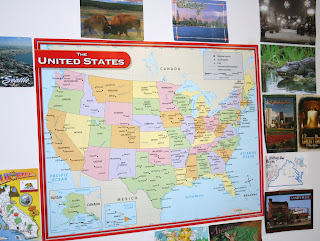 (Still need to connect the postcards to the state with some yarn...)

I wanted to take a moment to post about the status of our postcard exchange!

As of today we have received postcards from 12 of the 50 states (well, 49!) We have received multiple from California, Washington and Pennsylvania and that's great! You send us one we will send one to you in return! I have been working on a slide show to show each of the postcards received but have been having problems with it. Hopefully I can get the kinks out soon!

So what do we do with the posctards? After Kailani receives a postcard she:

3) Fills out a state worksheet which includes the following info:


3) I then have her do a worksheet from a book I purchased from Sam's Club called, "The Complete Book of Maps and Geography". It's chocked full of information but the pages are simple and quick to do.

So what are my thoughts so far about the exchange?

LOADS OF FUN! Kailani gets so excited when a postcard comes in the mail and I swear she studies everything about it! Not only is she learning about the other states but she is also learning more about her home state of Hawaii as well. For each postcard she sends out I have asked her to write one fact about Hawaii.

I think the pros of doing this exchange outweigh the cons but there have been a few disappointments. The biggest con I have found is sending out a postcard and not getting one in return. The solution? For anyone planning on doing an exchange like this one I would encourage you to not send a postcard until one is received. I realize that people get busy and some just plain forget but it's disappointing if you're already sent one and am expecting one in return.

Also - while this is not a "con" I thought I would mention it - some people do not provide a return address when sending their postcard. It could be for several different reasons - simply forgetting; not enough room on the postcard; or some people just want to participate in the exchange by sending a postcard but want nothing in return. Like I said, not necessarily a "con" but I thought I was worth mentioning.

Anyways! We are still looking for postcards from 38 more states! I also want to welcome you to participate if you live outside of the United States! We will happily send you one in return! Let me know if you're interested! Thanks!
Posted by ***Sharon*** at 4:56 AM