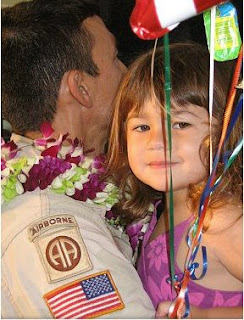 Daddy is Home - 2006
I hope everyone is having a wonderful three day weekend! Unlike most kids my daughter actually has school tomorrow (Memorial Day). Why? It's a "snow make-up day". A few months back school was canceled due to snow and apparently some nitwit decided Memorial Day would be the perfect day to make it up. I'm curious to see just how many absences there will be at school!

On a more serious note - I wanted to take a moment to remind everyone to please stop, if even for just a moment to remember the service men and service women that paid the ultimate price fighting for our freedom. This day is in remembrance of you. Thank you for sacrifice.

Over the years the true meaning of Memorial Day has been forgotten. It has been replaced with a weekend of pool parties, beach days and backyard barbecues. Currently Memorial Day is celebrated every last Monday in May. However, there is an attempt to change Memorial Day to it's original day of observance, May 30th.

On 17 of March 1989 Senator Inouye [HI] introduced a bill to the Senate which called for the restoration of the traditional day of observance of Memorial Day back to May 30th. Every new Congress since then (every two years), Mr. Inouye has faithfully re-introduced the bill. Several times a companion bill was introduced to the House.

As eloquently stated by Mr. Inouye in his introductory remarks to the bill he introduced in 1999:

"Mr. President, in our effort to accommodate many Americans by making the last Monday in May, Memorial Day, we have lost sight of the significance of this day to our nation. Instead of using Memorial Day as a time to honor and reflect on the sacrifices made by Americans in combat, many Americans use the day as a celebration of the beginning of summer. My bill would restore Memorial Day to May 30 and authorize our flag to fly at half mast on that day. In addition, this legislation would authorize the President to issue a proclamation designating Memorial Day and Veterans Day as days for prayer and ceremonies honoring American veterans. This legislation would help restore the recognition our veterans deserve for the sacrifices they have made on behalf of our nation." (1999 Congressional Record, page S621)

*Courtesy of US Memorial Day.org*

In remembrance of our fallen soldiers......